The overall ad spend pie grew by 4.2 percent to $2.39 billion in 2014, according to the Advertising Standards Authority’s figures for the 12 months ended December 31. And once again it was interactive leading the charge, overtaking newspapers and getting close to TV in the sector rankings.

In terms of size, TV is still on top, but only just. Its market share decreased by two percent after a drop of $20 million to a total of $614 million. That followed last year’s increase of $20 million. But this figure excludes ad revenue from online video, which clocked in at $23 million across TVNZ, MediaWorks and Sky.

“At a topline level we’re still running revenue around 2008 levels, before recession, before any of us we had any meaningful online presence,” says Jeremy O’Brien, TVNZ’s head of sales and marketing. “So we think it’s holding its own really well.”

O’Brien says total advertising expenditure on TV shows across both on-air and online with the three broadcasters actually adds up to $637 million for 2014, which is 26.7 percent of the total advertising market. And because it feels the existing figures give an inaccurate reflection of the TV market, the networks will include VOD ad revenue in TV rather than in the interactive sector from next year. 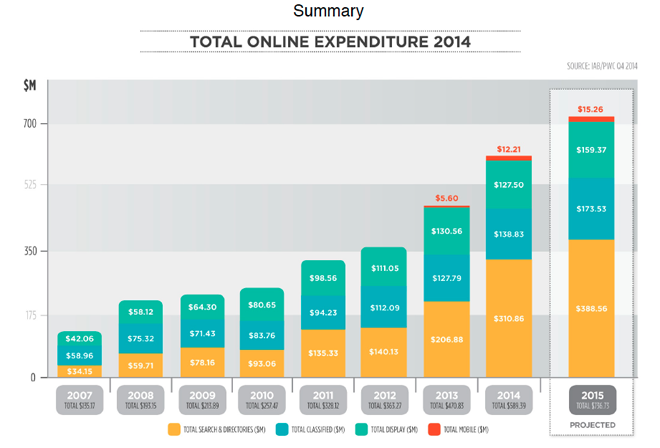